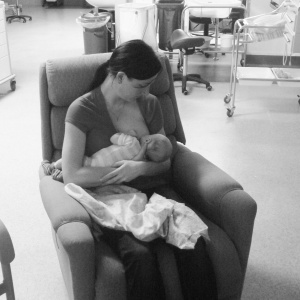 Before I became pregnant, and during my pregnancy, I would have told anyone who would listen that I would be breastfeeding my baby. I had heard the mantra ‘breast is best’ so many times and wholeheartedly agree. I never imagined for a second that breastfeeding my baby may not have been an option.

At Alexander’s 20 week anatomy scan he was diagnosed with an enlarged bowel due to an obstruction. I lived in a small country town and was referred through to Maternal Foetal Medicine at Mater Mother’s hospital in Brisbane. It was impossible to determine what was causing the obstruction but it was decided that I would need to give birth to Alexander at Mater and I was prepared for surgeries, tests and a lengthy stay in NICU after his birth. Well, as prepared as one can be.

After Alexander was born he wasn’t allowed to feed due to the obstruction, I missed those precious few moments after birth where a mother gets to breastfeed their child. My job as a Paramedic meant that I knew the importance of this time, both emotionally and physically for mother and child. I had delivered babies before and witnessed how beautiful the first few moments of their life can be. With Alexander, I was able to spend around 10 minutes with him (most of which I wasn’t allowed to hold him) before he was taken away for tests and scans. Many women say after they give birth they have a sense of feeling complete. I had never felt so alone and empty.

Alexander had his first surgery 6 hours after he was born. For many reasons he wasn’t allowed to breastfeed and couldn’t even be fed by a feeding tube. The nature of his condition meant that any milk he would be given would cause an increase in the production of stomach acid and could potentially result in dehydration, among other things.

Prior to Alexander being born, I had never even heard of a breast pump, let alone knowing that I had to pump milk every few hours for him. I was so uneducated. I had been so focused on what would be happening with my son I didn’t even think to research what I would need to be doing.

The day after Alexander was born a nurse came to see me in my room at the hospital. She told me I had to pump breast milk. I had been expressing colostrum by hand for a few weeks now and had been saving those precious few millilitres of gold but had no idea how an electric pump worked. The nurse showed me in a flippant way and told me I had to express for 20 minutes on each side, then she left.

The pain was excruciating. My milk hadn’t come in yet and after 10 minutes I had less colostrum expressed than what I would have had by hand. I kept telling myself that this is what I had to do for my son and persevered. I cried and cried the whole time. When I had finished the 20 minutes on each side I realised that the pump had actually caused the skin on my nipples to blister. They were so raw to touch and the skin would stick to the inside of my bra causing me to gasp in pain at random times.

I explained through tears to the NICU nurse when I gave her the tiny amount of colostrum I had managed to express. She was mortified to say the least and arranged for me to see a lactation consultant the following day. Until then I expressed by hand and lathered myself in coconut oil.

The lactation consultant was brilliant. She too was horrified at what the nurse on the ward had told me to do and arranged to have her ‘re-trained’. The LC sat with me as I expressed by hand, was so understanding of how difficult things were with a son in NICU and gave me tips and advice as to how to bond with my son. I continued to hand express, even as my milk came in, until my nipples were healed.

At a few weeks old, Alexander was still not able to be fed anymore than just 3mls of milk every 3 hours. One of his doctors said that I was welcome to try and get Alexander to latch and nurse from me, only after I had expressed all the milk I could from my breasts. I was so excited by the idea of getting to nurse my son but so nervous that I would do it wrong. I didn’t want him to get too much milk from me and go backwards in his progress.

Later that day I expressed all the milk I could and had one of the NICU nurses walk me through the process of getting my son to latch on. Alexander was so distressed and upset because he could smell my milk. He would latch on for a few seconds, then pull away and scream when he realised there was nothing there. After a few minutes of trying I decided to stop, I didn’t want him to create a negative association with breastfeeding and the whole process was upsetting me just as much. I realised there may be a chance that he just wouldn’t breastfeed and I started preparing myself for that.

The weeks passed and I continued to pump milk. Alexander had his second surgery and he was progressing well. He started to have his feeds increased, gradually at first, until he decided to take matters into his own hands. One night he pulled his central line out – which was the route in which is artificial foods (TPN and lipids) were being administered. Rather than continuing with TPN and lipids, Alexander’s doctors decided he could increase his feeds more rapidly and then could start on breastfeeds.

I was so excited but so incredibly nervous and anxious. Our last attempt at breastfeeding hadn’t gone too well and I was concerned this would happen again. I kept reiterating to myself that I had a back up plan and everything would be okay. This time round, I was calm.

I had an amazing nurse help me with Alexander, she had been looking after him on and off for the last few months and she understood how I was feeling. She made sure I was comfortable in the chair and then handed Alexander to me. Within seconds he latched on perfectly. There was no stopping this little man. He fed from both sides and was so happy and content afterwards.

I cannot describe the elation I felt. From then on he was breastfed whenever possible and within two days we were on our way home. I was so grateful to be able to feed my little man, knowing just how easily it could have gone the other way.

Alexander is now 21 months old and while I don’t produce breastmilk anymore (not from lack of trying that’s for sure) he still nurses for comfort. I absolutely love my time breastfeeding. The bond it helped create between my son and I is too incredible for words. Our breastfeeding journey was not easy, we had our highs and lows, loss of supply, gain of supply, refusal to feed, and transition to bottles (with pumped breastmilk) just to name a few hurdles. But it was worth every second.

Milky Mums is a community organisation established to provide support to Mums who are breastfeeding or expressing for premature and seriously ill babies in Australian neonatal intensive care units (NICUs).  Learn more about our work at www.milkymums.org.au

One thought on “Krystal. Breastfeeding created a bond between my son & I which is too incredible for words.”

Hello sunshine... :)
Love this reminder to be kind to ourselves from The Smallest Things.
Do you remember baby Liv? Here's our favourite ex-30 weeker enjoying breakfast and looking super cute in her moose outfit! Repost from @trefaldighetstiden The moose is loose!!
The story behind Milky Mums in that's life! magazine this week 😃