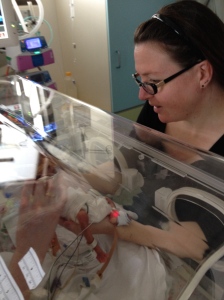 After having one prem baby already, I was pretty determined to not have another.  Not because Having my 31 weaker was horrific, he was very strong!  But because I didn’t want to pump!  There was no reason found for Atticus being born early and no reason for this pregnancy to be early too.  But I felt like I needed to do SOMETHING, so at 18 weeks I started a course of progesterone.  It didn’t work.  Hazel came early and fast at 25+6 weeks weighing 875grams.  Unlike her bro, I had to have an emergency caesarean under a general, so I didn’t get to see her let alone hold her.  It was 19 days before that blessed event, it was the cuddle of all cuddles.  Giving Hazel my milk seemed even more important this time around because she was so frail, because I couldn’t hold her, help her, do anything for her.
My supply wasn’t as good as it was with my son.  Maybe because of the c section?Maybe because I had a toddler at home?  The stress?  Who knows.  Over the 4 months she was in Monash Newborn I pumped.  Like I did for her brother, I pumped by her bed, in the milk shed at the hospital, at home, in other peoples homes and even in the car! I had hired the same medela pump as before, this time form the hospital.  The pumping was horrendous!  I almost gave up so many times. Only the thought of being able to breast feed her kept me going.  Hazel was quite a sick little lady and there were many times when she couldn’t have any milk.  My freezer wasn’t up to the challenge.  So on top of paying for the pump and bags, I had to buy a freezer just for my milk!
Hazel came home strong enough to have one breastfeed a day, she almost came home with her feeding tube in, so I was grateful for that.  As hard as it was going to the hospital every day, this was hard too. I fed her  and then pumped, every three hours.  when she got a bit stronger, I would breastfeed her, top her up with a bottle and then pump.  This took an hour and a half and I did it every three hours.  I also had a 22 month old running round the house and a husband who works interstate,  I was going crazy!  I felt like no one understood what I was going through, why I was putting myself and my family through it!  Thank God for the other Mums I’d made connections with through the NICU.  They saved me.
Our feeding journey is far from over.  My supply was never great and while I have rid myself of the dreaded pump, Hazel is supplemented with formula after a few of her breastfeeds.  Even though I breastfeed her on demand every feed and she’s doing great I still feel like a bit of a failure, like me and my boobs have failed her.  I’m working on making my peace with that.  Mothers guilt is a force to be reckoned with!
Over the past two years and two delightful babies I have spent approximately:
$1600 on breast pump hire, attachments and bags.
$200 on a second hand freezer.
$400 on supplements and lactation cookies/ingredients
1260 hours sitting at a pump, washing/sterilising etc
Produced around 180 LITRES of MILK!
I’m sure every drop is much appreciated by my little ones.  It really is a labour of love.
Amber

Milky Mums is a community organisation established to provide support to Mums who are breastfeeding or expressing for premature and seriously ill babies in Australian neonatal intensive care units (NICUs).  Learn more about our work at www.milkymums.org.au

One thought on “Amber. A Labour of Love.”

Hello sunshine... :)
Love this reminder to be kind to ourselves from The Smallest Things.
Do you remember baby Liv? Here's our favourite ex-30 weeker enjoying breakfast and looking super cute in her moose outfit! Repost from @trefaldighetstiden The moose is loose!!
The story behind Milky Mums in that's life! magazine this week 😃